TV from A to Z: Private Practice 'Know When to Fold' 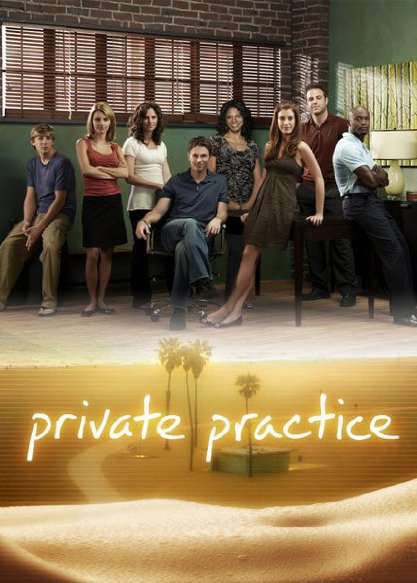 Private Practice was a spin-off of Grey's Anatomy starring Kate Walsh as Addison Montgomery. The show ran for six seasons on ABC. Unfortunately, I was one of the many who slept on this show while it was on the air. Thanks to Hulu and Netflix, I was able to discover the greatness of this show.

The main issue of this episode surrounds Pete Wilder (Tim Daly) and Sam Bennett (Taye Diggs) poaching a client from Charlotte's practice, a pro cyclist with a knee injury. The cyclist wants to have his knee repaired or at least the pain managed so he can compete one more time. His wife informs Pete and Sam that her husband also suffers from a heart condition and this is the true reason why he should no longer race. However, Pete and Sam do as their client request and patch his knee up so he can compete. Unfortunately, the cyclists did not survive the race. This leaves Pete and Sam questioning their true motives for treating him.

I liked this episode because you see Pete and Sam struggling with what initially seems like a minor ethical transgression. Then as more information is revealed the shades of gray grow darker as their ethical dilemma deepens. The tragedy is that if the two doctors never poached a client from another practice, they would not have to question whether or not the right call was made.

If like me, you begin watching Private Practice well after the show ended, you will see a pattern. You will notice how much Shonda Rhimes uses the same people over. In "Know When to Fold" Sarah Drew starred in this episode years before she snagged the role of Dr. April Kepner on Grey's Anatomy. Paul Edelstein was regular cast member of Private Practice and later had a recurring role on Scandal. It will be fun to notice these stars on this show realizing they played in either Grey's, Scandal, or How to Get Away with Murder years later.

Posted by ShawnTe Pierce at 2:11 PM