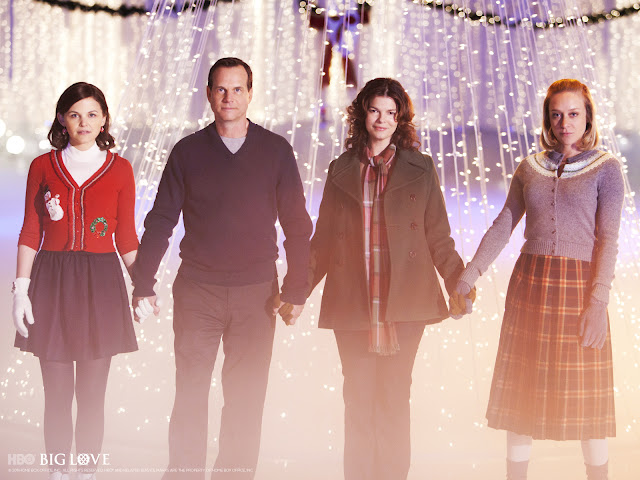 Big Love is hour-log drama that ran on HBO from March 2006 until March 2011. The delves into the life of a polygamous marriage living in society. Of course polygamy is not legal so the family has to hide the true nature of their relationship from most of the world. The drama stars Bill Paxton (Bill), Jeanne Tripplehorn (Barbara), Chloe Sevigny (Nicki), and Ginnifer Goodwin (Margene) as the main polygamous unit of the series.

In "Viagra Blue", Bill's stress with family, business, and Roman has taken a toll on his manhood. As a result, he gets a prescription for Viagra (hence the title). The show also introduces the three wives of Bill's polygamist business associate, Don Embry. The two sets have dinner together with Don discussing the possibility of taking on a fourth wife. Also two of Don's wives are having a secret sexual relationship together as hinted by them playing footsies under the table.

Nicki's spending has gotten way out control and she has maxed out and is overdue on some of the credit cards.

There is a huge issue within the marriage about boundaries. Nicki complains to Barbara that Bill is being disrespectful by going over time at Margene's house on Barbara's day. However, the pot that is Nicki went over to Margene's and had sex with Bill in Margene and Bill's bed on Barbara's day.

As you can see the show does display that there is conflict within a polygamous marriage. There are other issues within the series that deal with fictionalized Latter Day Saints issues.

You can watch Big Love on HBOGo, HBONow, and Amazon Prime Video via subscription.

Posted by ShawnTe Pierce at 9:46 PM