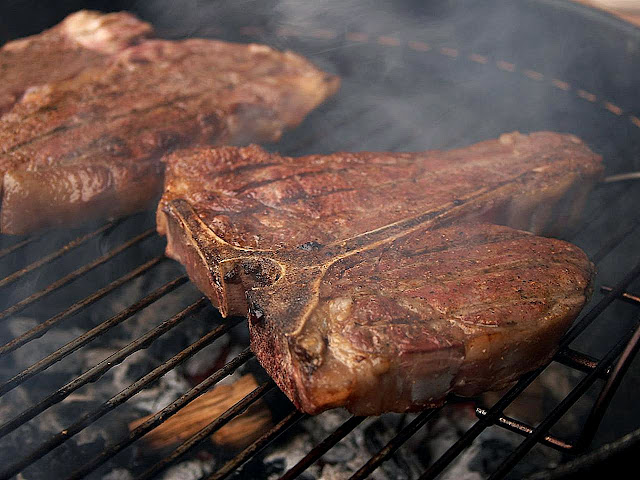 Many of us know that our bodies need rest. A good six to eight hours of sleep every night does a body and mind good. However, that is not the only flesh that needs rest. Sometimes the meats we cook need a rest as well. Now they do not need as much rest as we do. Giving those tasty meats a few extra minutes of rest after cooking can make a world of difference.


There are two very good reasons why and they both are due to redistribution.


The gist of it is, while cooking the natural juices of the meat move towards the outer surface of the meat leaving the middle with very little moisture. If you cut into meat immediately after cooking, the juices will run out. By the time you get to the center, the meat will be dry or not as moist as the first portions you ate. If you are a fast eater, you are not going to miss that lost moisture much. However, if you are the type who takes their time and savors each mouthful, then by the time you reach the center of your meat it will be dry and lack flavor.

By allowing that meat to rest, you allow those juices to redistribute throughout the meat. This means that the end and middle sections of the meat are moist or juicy. Thus, you will have the full flavor of the meat in each bite.


If you watch cooking shows or cooking competitions, you may have heard it said that meat continues to cook even after you remove it from heat. As soon as you cut into that piece of meat, it stops the last leg of cooking. You probably scratched your head at that one but it is true.

When cooking, the outside of the meat always cooks faster and gets the heat before the center does. You learn this through trial and error. The outside of the meat looks done then you cut into it and it is raw in the middle. According to a food expert on Chow.com, letting meat rest allows the outside and inside temperatures of the meat to come to equilibrium. In other words, resting lets the inside draw heat from the outside to finish cooking the rest of the way.

What is the Recommended Resting Times for Meat?


When it comes to thin cuts of meat like fish, thin steaks, ribs, and pieces of chicken you really don't need to rest them. They don’t hold much residual heat so any additional cooking needed would be over by the time you are served your meal. While meat is resting you should cover it loosely with foil (unless it was cooked wrapped in foil, then you just leave foil in place) to prevent the outer surface of the meat from getting cold. These times come from Letting Meat Rest After Cooking.

Whether or not you rest your meat, is your decision. Note there are people who do not feel it is necessary. Check out the AmazingRibs.com piece on the subject titled All About Juiciness, and Debunking the Resting Meat Rule: It's Time to Give this Myth a Rest and Stop Crying over Spilled Juices. In a tight nutshell, it advocates that about five minutes is all a piece of meat (besides larger roasts and briskets) needs for resting.

I'm team rest your meats. Where do you stand?