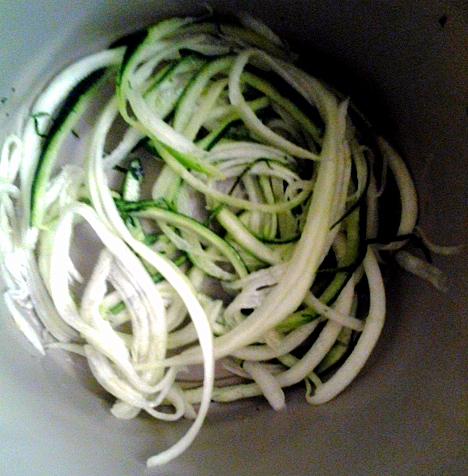 Last summer when I was in the hospital, I became addicted to The Chew. One of the things they show quite often are veggie alternatives to dishes. An alternative I wanted to try was using zucchini instead of spaghetti in pasta dishes. In order to do this I needed to turn zucchini into spaghetti-like noodles. Thanks to a complimentary spiralizer from Retseliney, I was able to do just that.


I had grand ideas for this thing and then had to face reality. I wanted to spiralize onions, potatoes, eggplant, and really just about every vegetable I could get my hands on. You really need to use this thing on firm, not too hard vegetables. As a result, I had to rethink my zucchini dish fantasies.
On a zucchini, this spiralizer works like a dream! I saw my zucchini turn into spirals of green and white in my plastic container. I will say things got tricky after a while because the blades became a bit too wet from the water in the zucchini. This made spiralizing difficult. I cleaned it, took a break and went back at it 30 minutes later after the blades were dry. It performed like it initially did.


While this hand spiralizer does work well. There are some handling issues and it cannot work continuously. This is something my mother will not be able to use either due to her arthritis. Honestly, my mother can use a variety of hand-held kitchen tools but I was having a bit of trouble getting a safe grip so I knew she would not be able to use it. In addition, there is the issue of it not being able to continuously spiralize zucchini in one session.


This is good for small meal tasks. I do not recommend using it for larger meals. If you want to feed two to four people then this is perfect. If you need to feed more than that, you can but it will take you a while. In addition, your hands may cramp up on you a bit. It is currently priced at $14.50 so that is not a bad deal. If it ever reverts to the list price of $49.99 then I would say pass on it and get the heavy-duty spiralizer that you use with the hand crank.


Now for the tough question...
What should I make? I am stuck between three dishes:

I received a sample(s) of the product(s) to keep for consideration in preparing this content.

Posted by ShawnTe Pierce at 9:40 AM